Bring Me the Head of Santanico Pandemonium

Following the trail of the mass grave, Freddie (Jesse Garcia) and Kate (Madison Davenport) uncover epic secrets and confront Oculto, a reclusive and dangerous Lord. Seth (D. J. Cotrona) and Richie (Zane Holtz) take the girls on a double date, and Carlos (Wilmer Valderrama) lets go of the past.

Aiden is seen having rough sex with a woman in a trailer and after they are done, he is seen looking at the bonds and when he cuddles with her, she thinks that he is going for more, he tells her it is the best part and bites her, putting his venom into her. Afterwards, he walks out with the woman and is confronted by Narciso. He asks about the bonds and he tells Narciso that the other four are missing and he thought he could figure it out with the ones he had, but he needs all to figure it out. He also tells Narciso about his sex problem and that he turned the woman. Narciso declares that it is up to him to get the bonds and when Aiden thinks Narciso is about to shoot him, he shoots Aiden's progeny instead, which Aiden asks why he did that. Narciso tells him it is up to them to get the bonds as it depends on their future.

Kate and Freddie are talking to a forensic tech and she explains to them what happened to their "John Doe", which is he had a human fingernail carving the symbol in his forehead, a blunt object shattered his knees and he had fought back, which means there is some of the murderer's blood in his fingers. He asks to be alone with the victim and the tech walks out. He and Kate consult the corpse and he takes a knife to his hand and cuts, and he takes some of the blood left from the fingers and the blood goes into his hand. Freddie shakes on the floor and he sees the murderer killing a woman and then it flashes to a bunch of people on top of the other in an Aztec setting. Kate tries to wake him out of it and he eventually comes out of the blood bond vision.

Seth and Sonja are at a fancy restaurant waiting for Richie and Santanico, and they talk about the two. Sonja thinks that Santanico will not be as bad as Seth puts her, and he sticks to his opinion about her still. Richie and Santanico walk in and Sonja stares at her as they come to the table. They exchange short words and it is shown that Sonja does not know about the culebra world. Santanico says that they do not need Seth or Sonja's help, and then calls Sonja a name, which Sonja does not approve of and calls her a bitch. They order their food and after some more remarks, Sonja decides to go to the bar and Santanico leaves sometime after her.

The Regulator is driving his car to the Titty Twister with Carlos being dragged in chains behind the car. When the car stops, Carlos remarks saying that was mean and is picked up by The Regulator. Carlos comments that he and the Regulator are the only ones to make it out of the labyrinth and The Regulator says "does not that make you special?" and then says there is no such thing as special. Carlos seems to think he is and The Regulator then gives him over to Narciso. The Regulator drives off again and Carlos is brought into the bar.

Kate and Freddie are seen at the police station going over files and Kate discovers that Earl was on a case similar to what Freddie saw in his blood bond vision. She also says that the case was never pursued and there are no more notes about it. Chance Holbrook comes over to the desk and asks Freddie if he knows anything about Tony Mendoza's whereabouts and he said he has not. After Freddie tells him his answer, he takes it and leaves with calling Kate "Ma'am". They ask for other old files of Earl's so they can see if they can dig up more information. In the flashback to the 1980s with Earl, he is seen visiting a man about his survival of being killed and he draws a picture of a symbol he saw. Earl looks a little shocked and stares at the drawing.

At the bar, Sonja calls an unknown person and says not to worry about it and hangs up. Santanico comes up and Sonja tells her they do not need to talk. Santanico asks her if she is calling anyone and Sonja gets irritated and smashes a glass, which causes her hand to bleed. Santanico is drawn to the blood and is seen trying to control it, but has difficulties, and says she can help. Sonja runs to the bathroom instead and Santanico wipes a little bit of blood off the counter and takes a taste. She seems to have a surprised look on her face as she does.

Narciso and Carlos are sitting at a table and they have drinks. They talk and Narciso offers him the Titty Twister to put him in charge and he can do whatever he wants to it. Carlos talks in Spanish and reveals that Narciso was one of Pancho Villa's bank robbers and was considered the most handsome. He also reveals that he turned him and calls him "homey". Narciso tells him that he has a driver waiting for him and he needs Carlos' decision as to what he wants to do. Scott is seen behind the driver and he asks what Scott is doing. Scott says he just is and then stakes the driver, and Narciso keeps telling Carlos that his driver is there. Carlos says yes and Scott puts a sword against Narciso's neck.

Kate and Freddie go through Earl's files and find a little more on the case. Kate says that the man who could be responsible is around an oil factory and declares they go there. At night, they arrive at Celestino's house and Freddie says she was right about the oil. They get their weapons ready with a gun and crossbow, and they head towards the house. A man attacks Freddie and when he pins the man against a tree, Kate fires a crossbow at him and the man hopes he does not get replaced as Freddie is strong.

Richie and Seth are seen sitting and waiting for the girls to come back, and Seth declares that he is done waiting and they should start eating. Richie notices Seth needs salt so he puts it near him, and Seth sprinkles it on his food. Richie is seen doing something similar to Seth, Seth asks the waiter to bring Richie some sauce and then gives him it.

Freddie and Kate are inside the house and it looks very cluttered with thousands of books and other assorted things. Celestino tells them something and Freddie says he needs to put his hands up and turn around. Celestino says he is something far beyond and he then turns around, and when he says he is something else they would not understand, he flashes his eyes like a culebra.

Celestino talks to Freddie and Kate and says he writes stories about people he has encountered and Freddie asks which Lord he is. He proclaims he is the cool one and Kate remarks that the last time she checked, there is only one Lord she knows of. She gets closer to him and points her crossbow at him, to which he remarks that she is adorable. Tomas comes behind Freddie and Celestino tells them to sit. He tells them about the sacrifices and Earl coming to confront him about the killings. He threatens Earl with his family and putting him as a character in his stories. Earl goes to the man who escaped Celestino and tells him he found the killer, but probably would not be able to apprehend him. The man tells him since he knows of Celestino and he would possibly come after him, he asks him if he could watch over his son, Frederico, who is revealed to be a young Freddie, but at first Earl says he would not be able to, but Freddie's father tells him that the mother will be taking care of him, but he wants Earl to make sure Freddie grows up to be a man, to which Earl accepts. Kate and Freddie listen to the story and Kate asks him about his feeding habits, and Celestino says he needs to, and goes over to Kate, ready to bite her, but Freddie gets up and is almost stopped by Tomas, but Celestino says he has something else. He offers Kate his hand and she gives it to him, and he, Kate and Freddie go into another room that has wine bottles in it. Celestino proceeds to tell them that Amancio is the leader of Lords and the oldest. He says he got the Titty Twister and Celestino says it is not as great as everyone thinks. He says he keeps all the records of the Lords and they are siblings. He goes over to a faucet and proceeds to get blood out of it. He drinks from it and offers it to them, but they do not want it. After he tells them the story of Earl and about the Lords, Freddie asks him about the visions, which Celestino is surprised Freddie still has them and he proclaims he would have known about it. He then says that someone must have put in his mind and wonders who, and they then hear a car come up. Celestino tells them to go somewhere and they run into the wine/blood compartment.

Amancio and The Regulator arrive at Celestino's house and Tomas is killed by The Regulator. They walk into the house and Celestino exchanges some hostile words with them a little. He reveals that Amancio was the one to implant the visions in Freddie and that he had already left, which is false as Freddie and Kate are in the wine/blood compartment watching the situation. Amancio sees the weapon Celestino used to kill his victims and grabs it. He says that it is the key to everything and proceeds to stab Celestino with it. He then puts his hand into his mouth and pulls the snake out of him while we see more of the visions Freddie saw with the victims, and The Regulator smirks as the event goes on. Celestino then turns to ash and Amancio puts his hand on Celestino's face.

Carlos, Scott and Narciso walk out of the bar and Narciso is seen with a chain around his neck, similar to Scott in Opening Night. Carlos tells him to lick his boot and he will be set free, but Narciso does not and Carlos proceeds to behead him, which leaves Scott surprised. Carlos tells him to pick the head up and toss it in the back, which he does. Carlos tells him that Cortés thought he was a god, but in fact he was not, but Carlos seems to think that he was instead. Carlos presses a button and the Twister explodes. Scott is more shocked and surprised, and they watch as it catches aflame. They proceed to get into the car and drive off while the Titty Twister burns to the ground. 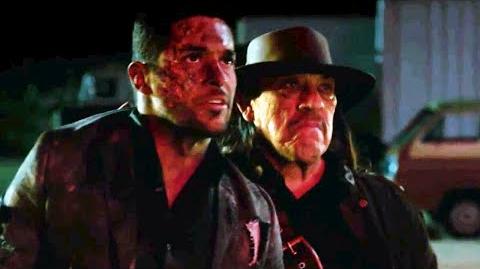 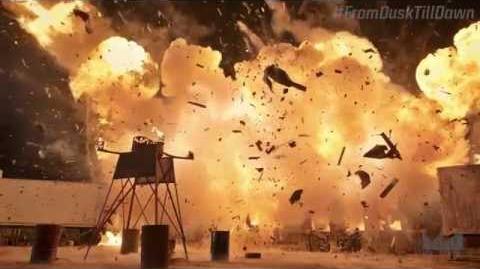