From Dusk Till Dawn 2: Texas Blood Money is the 1999 American supernatural crime-horror direct-to-video sequel to From Dusk Till Dawn. It was co-written and directed by Scott Spiegel. It is the second film in the trilogy of films but chronologically it is third and last.

The film starts out with a city camera pan and then shifts a room with an elevator. Two people, Pam and Barry, are seen talking about their client, and both have differing opinions on him being a serial killer. They walk in and the lights start to flicker, and the elevator then stops. Barry decides to climb up and see what's going on, and a maintenance worker's dead body falls on him. He gets back up and a bunch of bats come at him, killing him in the process. Pam starts panicking and the bats are biting the ropes of the elevator, while others are attacking her as well. She gets bitten and she kills a few, before one flies in her mouth and she gets killed as well. It is then revealed afterwards that this entire sequence was a movie being watched by Buck, who is having trouble with the television coming in. He is busy trying to get the TV working while Marcy is trying to make love to him. She soon quits and he changes it to a better channel. The reporter, Teri Harper is reporting about Luther Heggs and his escape. She asks Otis Lawson a question and he tells her he will put Luther where he should belong.

Sometime later, Otis and Edgar McGraw arrive at his house and come in. Otis begins questioning about Luther and Buck asks him if he has a warrant, after which Otis grabs his by the balls and Buck relents. He tells Otis that he doesn't know where Luther is and that he went straight. Edgar asks Marcy if she's seen him and she said she has, but she says on the TV. Buck then gets a call and says "Hey, mama" as Otis is getting ready to walk out the door. He turns around, but when Buck says that, he then leaves and it's revealed to be Luther, as Buck's mom is dead.

Luther who wants to get the old gang back together and arranges to meet Buck at the El Coyote in Mexico. Buck starts rounding up the old team which consists of C.W. Niles (Muse Watson), Jesus (Raymond Cruz) and Ray Bob (Brett Harrelson).

Buck, C.W., Jesus and Ray Bob book a room at the motel, where they wait for Luther. Whilst on his way in his car, Luther hits and kills a bat resulting in his car breaking down. When the car won't start, Luther walks over to a nearby bar, the Titty Twister (open til dawn). He calls Buck from the bar to tell him about the breakdown. Luther in the meantime is offered a ride to the El Coyote by the bartender Razor Eddie. However, when Razor Eddie (Danny Trejo) finds out about the bat that Luther hit, he turns back. Realizing that the bat was actually his friend Victor (Joe Virzi), Victor and Razor Eddie proceed to attack Luther, resulting in him being turned into a vampire.

Back at the motel, Jesus has sex with Lupe (Maria Checa), a woman he bumped into when he arrived at the motel. After they finish, Jesus sleeps while Lupe grabs a shower. Luther arrive in the windows in the bat form where Lupe is and kills her. Jesus awakes and starts to get dressed. The shower turns off, and he notices a blood puddle seeping from underneath the door of the bathroom. He goes to investigate and attempts to open the door. He kicks open the door from behind Luther and sees the body of Lupe lying lifeless in the bath. Luther then attacks Jesus before he hides in the bathroom. Lupe then reanimates as a vampire and attacks Jesus. He manages to kill Lupe by cutting her head off and then jumps out of the window in order to escape.

The gang drive off to the bank, with Jesus and Luther covering the windows with black paper. Unbeknownst to the gang this is to allow Jesus and Luther to have a place to escape to when the sun rises. Back at the Motel, after receiving the call from the Motel manager, Otis observes the crime scene in the bathroom where Lupe's head in the bath. Upon arriving at the bank, Luther enters the building through the vents and proceeds to kill the security guard on duty and snatches the keys to lets the others in.

Luther and C.W. proceed to the safe where they begin cracking it open. As they try to open the safe they notice the handle on the vault resembles the shape of a cross causing Luther to squeal before quickly covering the handle with a coat. While working with C.W. closely, Luther gets tempted to bite C.W.'s neck. C.W., feeling uncomfortable due to Luther's proximity tells him to back off, before removing Luther's coat from the handle revealing the cross again. Luther is now exposed as a vampire and he bites C.W, turning him into a vampire in the process.

The police arrive at the bank. Buck tries to inform them to escape, but they refuse, being turned themselves into a vampire, except Ray Bob. Buck and Ray Bob leave the bank but are forced back in by the police and SWAT team. With the bank surrounded by police and no escape in sight, Otis arrives and calls the bank. Jesus answers the phone and Otis asks if Luther is there and which Jesus confirms along with Buck. Jesus passes the phone to Buck and Otis asks to speak to the guard. With the guard dead, Buck tells Jesus to pretend to be the guard and tell Otis in Spanish that he is fine.

Otis then tells the SWAT team to enter the bank via the roof. Jesus rips the phone out of Buck's hand and tears it from the wall. Luther and C.W. unlock the vaults, before filling the bags with money. Noticing the SWAT team on the roof Luther has to act and he spots the SWAT team throwing tear gas down the vents. Luther leaps into action and kills them in bat form. Ray Bob, after going to the toilet, is asked by C.W. to help him fill the bags before Luther returns and bites him, turning into a vampire as well. Back in the guard's room, Buck and Jesus are still waiting. Buck takes a lighter from the desk to light his cigarette and notices that Jesus has no reflection in the computer screen.

Luther then enters telling the two to help load the money. Buck holds a gun to Luther, Jesus and C.W. and tells Ray Bob to stand by his side, seeing that his friends are vampires.The group attacks Buck but he prevails and escapes the bank only to be arrested and handcuffed by Otis. Otis sends in the SWAT team to clear out the bank,despite Buck's warning that they are vampires, the group of vampires brutally murder and feed on the SWAT Teams.

Suddenly, the sun comes up and the vampires try to hide. However, an eclipse takes place and the sun disappears. The vampire leave the bank and starts to kill the police and SWAT Teams in a full blown blood bath. Once the police have been dispatched with only Buck, Otis, and the Sheriff are left. A face-off between the survivors and the vampires takes place. Just as all of the vampires appear to be defeated, a female police officer who has been turned, attacks the survivors and succeeds in freeing the vampires. Buck responds by killing the female vampire, just as Jesus kills the sheriff.

Jesus then attempts to take the money himself before being caught by Luther. C.W. is then killed by Otis. Jesus is killed by Buck after being thrown onto a car bonnet and is impaled through the heart by a pipe. Luther attacks Otis, as Ray Bob attacks Buck. Seeing that the eclipse is ending, Luther and Ray Bob try to escape, Luther is killed by Buck from behind. Ray Bob then turns back to attack Buck, but he mistimes his attack and the eclipse ends revealing the sun. Ray Bob is killed by the reflection from Buck's sunglasses lens. Buck observes Ray Bob's sizzling skeleton and stumbles across to Otis. Buck and Otis wonder why vampires want money. Otis gives Buck a head start. Buck leaves while the police come. 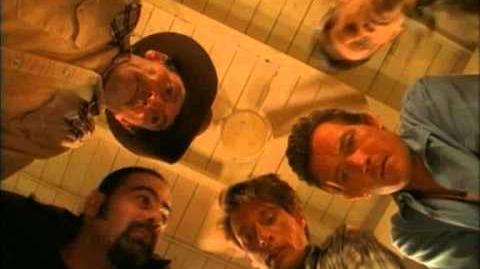