From Dusk Till Dawn 3: The Hangman's Daughter

From Dusk Till Dawn 3: The Hangman's Daughter

From Dusk Till Dawn 3: The Hangman's Daughter is the 2000 American supernatural crime-horror direct-to-video prequel to From Dusk Till Dawn. It was written by Álvaro and Robert Rodriguez and directed by P.J. Pesce. It is the third film in the trilogy of films but chronologically it is the first.

The film opens in 1913, Mexico when Pancho Villa is talking in Spanish and another man says he wants to see the bullet go by him. His blindfold is removed and as they are talking, a gun is seen being spun and Pancho tells his men to get ready. As they get ready to fire, the man, Ambrose Bierce, wakes up and notices his gun is in another's hands. He goes to Catherine Reece and when she tells him he has a nice gun, he smacks her and gets his gun back. She tells him she just wanted a look at it and he asks her if this is close as the gun is near her face. She nods yes and he tells her to go, to which he kicks her as she does. He asks for a drink and as he waits, a woman, Mary Newlie and her husband, John are seen handing out pamphlets.

He then talks to the bartender about pursuing business in Mexico and says he plans on joining Pancho Villa's revolutionary army. He also has a valuable object in his possession and as he talks, there are yells, and the outlaw Johnny Madrid walks out with the hangman to the execution platform. The Hangman, Mauricio,pulls out his whip and starts hitting Johnny in the back, giving him some fresh cuts. He then spots a girl, Esmeralda, who is revealed to be his daughter, and whips her too. He then wraps the noose around Johnny's neck and asks him if he has any last words, to which he replies "See you in Hell". The execution then begins and Ambrose notices the young woman, Reece, from earlier and that she has a shotgun ready to fire. As Johnny drops through the platform, Reece fires and Johnny is saved. He grabs a horse and starts shooting some of the men, and then grabs Esmeralda's hand, and takes her with him. Mauricio repeatedly shoots at them and one of his men tries to stop him, saying that she's his daughter, and he pulls off the hood, revealing a man with a few scars and says he'd prefer it's her.

As this happens, Ambrose starts boarding a stagecoach and isn't too thrilled about riding with the Newlies, greeting it with sarcasm. As they ride, they talk about religion and he reveals that he plans on joining the revolutionary army and he's an atheist. Somewhere else, Johnny and Esmeralda arrive at some rocks with some water and Johnny confronts Joaquin, who asks where he and the men were. Joaquin tells him that Chato is the "jefe" now. He tells Joaquin to get him and he does. They prepare for a showdown, and as they get ready, Johnny shoots Chato twice in the head and kills him. Soon, a rider is seen on a horse and most of the men are watching Esmeralda, while Johnny practices with his guns. One of the members brings the rider in and it's revealed to be Reece, and she tells Johnny that she wants to be his apprentice. He tells his men to kill her, and while pointing her gun at his privates, she reveals she shot the rope and she tells him what Ambrose is carrying for Pancho Villa. Ambrose is then seen thinking about the nightmare he had, but with the addition of vampires, and Mary takes away his alcohol, but gives it back. Johnny and his gang then get ready to rob the stagecoach and tells Reece if it fails, she dies. They go after the coach and begin to attack, killing both of the drivers and some of the outlaws. They look for the suitcase and find it's just a manuscript of Ambrose's new book, The Monk and the Hangman's Daughter, and Johnny is upset at this. Ambrose tells Johnny it's his life and he plans on joining Pancho's army, and Johnny puts down his gun. Joaquin points his gun at him, and Johnny tells him to leave him alone as he is an honorable man. After the outlaws leave, John gets kicked by Ambrose and they start to fight each other, with John punching him, but Mary intervenes. The outlaws arrive at a cemetery and John is seen driving the stagecoach, with them beginning to walk across the desert.

At the cemetery, Johnny tells Esmeralda this is for Catherine and tells her to step on one of the graves, and wraps a noose around her. He asks if she's scared and he begins shooting the grave's cross, and she says she is. She feels the noose start getting tighter around her neck and the men begin to insult her. Esmeralda tells Johnny he can't kill as she's a girl, but he tells her she's an outlaw, and will die like one. He shoots the grave again and it goes to the side, leaving her hanging. He tells she'll be a legend, and Esmeralda soon rides off, with Johnny yelling at her, and then rides after her. John, Mary and Ambrose are still seen walking across the desert and spot an establishment, La Tetilla del Diablo, and walk in. They look around and think that it's abandoned, and Ambrose slightly recognizes it from his nightmare. A candle comes on and Razor Charlie says they are closed, and they ask for a room. Ambrose asks for some brandy. Charlie notices the cross on John and goes in the back to get their beverage, and as they leave, Ambrose tries to toast, but notices no one is around.

Johnny rides after Esmeralda and she stops, angry for what he did to Catherine and asks what he'll do if she makes him angry. He tells her she doesn't and they begin to kiss. They ride off again and back at the inn/whorehouse, Mary notices the many scantily clad women. John brings their drinks and Charlie asks if they want more, and they say no. When John asks to see their rooms, Charlie points at the front, and they watch as a woman, Quixtla walks down. She introduces herself as the owner and will show them to their rooms. It then shows The Hangman and his men looking at Reece hanging as they talk. One of his men notices she's alive and cuts the rope. She says she wants to kill him and the Hangman is angry at what she has unleashed. He tells his men they'll be bringing her with them.

Ezra pulls the vampire off, showing that he has turned too and they start to dance, hypnotizing her in the process. He then bites her, and Catherine kicks down a door, yelling to some of the others to go in. Mauricio grabs a makeshift cross and holds it up to the vampires, repelling them back and they close the door to the room. Joaquin and John fight more, with Ambrose telling them that it's enough. Mauricio then punches Johnny and Ambrose tells them to stop as well, since everyone in the room says they all have a score to settle. The vampires then break the door down and the men start shooting at them. They run to a tunnel and Esmeralda falls on the ground. Esmeralda keeps twitching and Johnny brushes her hair back, revealing a bat on her. He grabs the bat and many others reveal themselves, with the group putting their torches up, setting them on fire, and then running away.

In a post credits scene, set in modern day, Ambrose is alive and telling a patron the story which he doesn't believe and prepares to leave. Ambrose tells him he has proof, revealing that he was bit by Quixtla as they fell out the bar, and he's now a vampire. He rips out the patron's heart and bites it as the film ends. 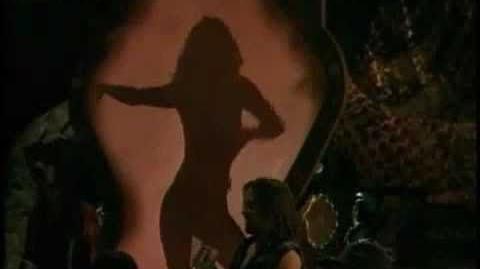