From Dusk Till Dawn Wiki
Register
Don't have an account?
Sign In
Advertisement
in: Episodes, Season One, Episodes featuring all main characters, Flashback episodes

As Santánico tries to turn Richie to her cause, Freddie confronts Carlos about his destiny and the temple’s mysterious past. Seth, the Fullers and Sex Machine battle their way deeper into the temple, where they meet an unexpected ally.

The episode opens with a flashback to a ship and Carlos dressed in a conquistador outfit, being given a sword by his commanding superior and claims the land as theirs.

Back in the present, Santánico and Carlos discuss Richie's condition, and she assures him things are going the way they should, and he complies. Seth and the Fullers are in a process of what to do with Freddie and they take a vote. As this happens, Scott is in one of the tunnels, but he isn't alone. Freddie gets tied up and the group opens the trap door he went through, crossing the grinder, but unfortunately, the weapons they acquired are dropped. Freddie escapes his bonds and Richie wakes up, to which Santánico tells him what her intentions are.

In the bar, Freddie and Carlos get in a fight, with Carlos proving to be strong and he reveals that Freddie comes from an ancient bloodline called the Otomi, which is why he managed to survive the venom. In the underground, the group gets chased by a bunch of culebras and they lock themselves in a storage room, where they meet Sgt. Frost. He gives them a pinwheel, but it doesn't have the most best choices on it.

In the storage room, Frost gives them 10 minutes to pick their weapons and Kate tries to talk him into going with them, but he seems to have lost hope after experiencing the visions that tunnels have given him. After leaving the room, Kate experiences the visions Frost was talking about and is grabbed by a culebra, and tied to the altar. In the tunnel, Seth, Jacob and Aiden go to find Kate, but are outnumbered by some of the culebras, and Frost comes in. He sacrifices himself and blows the altar room up, leaving it a wreck, and Richie lets Santánico turn him into a culebra. 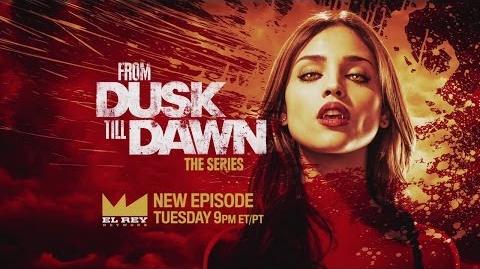 Next On From Dusk Till Dawn The Series - Episode 8
Promo