From Dusk Till Dawn Wiki
Register
Don't have an account?
Sign In
Advertisement
in: Episodes, Season One, Episodes featuring all main characters, Flashback episodes

Gonzalez crosses into Mexico and is captured by Carlos's cartel. Carlos wants him tortured and killed, after hearing he has insight about the blood cult. At the Titty Twister, Seth believes they made a mistake coming there, while Richie believes otherwise. Outside, a man named Narciso saves Seth from a biker gang attack led by the bar's doorman. Gonzalez escapes the cartel and arrives at the bar, just in time for Carlos to introduce Santánico Pandemonium's show. Richie recognizes her as the woman in his visions that led him there.

A flashback is shown with a seemingly crazed man killing a snake for food and be begins to hallucinate a woman, and is interrupted by Warren Pritchard asking if he wants to do a job, and it reveals the crazed man is Richie. It then goes back to the group having made it to the Titty Twister. They walk towards the door and encounter the doorman, who Richie and Seth began to beat up. Richie looks up and sees the symbol on his knife on one of the walls and Seth looks at it as well, beginning to become puzzled. Seth asks about Carlos and it's revealed he owns the bar. Seth runs into trouble with the doorman from earlier, until he is saved by Narciso and has a drink with him, talking about Carlos and El Rey.

Kate tries to convince Richie to let her family go, but he wants her to stay and they kiss. As the brothers do a knife toss, Kate makes a deal with them; if they win, she and her family stay, and if they lose, they can be let go.

Freddie begins to hallucinate and it leads him towards the bar, but before this, he runs into some trouble with Carlos and his men.

At the end, Carlos introduces Santánico and Richie instantly recognizes her as the woman he has been seeing in hallucinations. 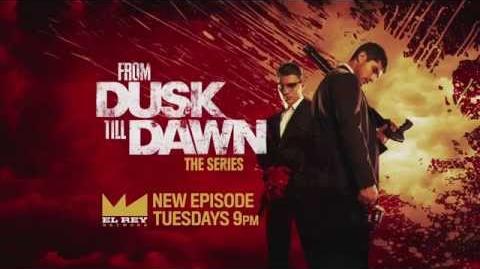 Next On From Dusk Till Dawn The Series
Promo