From Dusk Till Dawn Wiki
Register
Don't have an account?
Sign In
Advertisement
in: Episodes, Season Two, Episodes featuring all main characters

The Last Temptation of Richard Gecko

Bring Me the Head of Santanico Pandemonium

There Will Be Blood

As the pieces of the big job fall into place, the uneasy trust between brothers and partners crumbles in the light of the betrayals and new loyalties.

Somewhere in the desert, Carlos, Tanner, Scott and Kate finally solve the ancient codex and complete a ritual involving an innocent killing another innocent.

Seth and Richie stake out Greely's Meathouse and watches Balthazar from afar. Gonzalez tracks down the Geckos and makes a deal with them. Gonzalez, the Geckos, Santanico and Sonja sneak into Greely's Meat Product factory. As the brothers load their weapons, Richie tells Seth he hasn't reached his full potential as he hasn't figured his wayob yet; meaning his extra power. When they arrive at Jacknife Jed's, a man named Vincent is checking the cargo and Santanico is in the back in a heavily frozen area so she won't be detected. As they go through with the heist, it's revealed that Sonja made a deal with Malvado, and Seth shoots her when he finds out.

Carlos, Scott and Kate arrive at Jed's; Carlos makes a deal with Malvado, he'll exchange Kate for the ancient key and Malvado accepts. Carlos and Scott find out that Gonzalez took the ancient key, but as he escapes from the factory they take it back from him and bury him alive.

Richie ends up in Malvado's office after he gets inside his head pretending to be Santanico. As Santanico tries to find Richie, she has a vision of him accepting Malvado's proposal to take his place as the head of the Nine Lords. 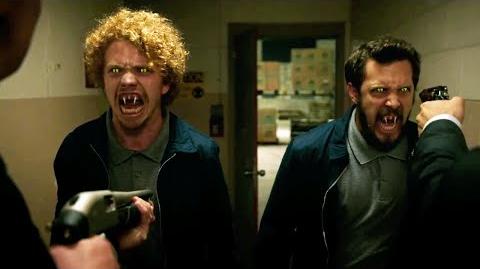