From Dusk Till Dawn Wiki
Register
Don't have an account?
Sign In
Advertisement
in: Episodes, Season One, Episodes featuring all main characters, Season Finale

Aiden is revealed to be a cult fanatic and is killed by Freddie; Kate kills her father after Scott bites him; Carlos turns on Santánico and goes on Narciso and the Lords' side; Freddie returns to his family; Richie and Santánico head for the States, while Carlos enters the labyrinth, with Seth and Kate riding off together.

Gonzalez realizes Tanner is a cult fanatic and saves Kate, who Carlos wanted to sacrifice as her blood is pure, and before Tanner can kill her, Gonzalez shows up and fights him, and Gonzalez stabs him in the stomach. Alone with Scott, Jacob cannot bring himself to kill his son who has turned, while Scott bites his father, hoping Jacob will see that being a demon serves a better purpose. Kate must kill her father before he turns and she mercy kills him as he tells her to look after Scott. As they go through the labyrinth, Gonzalez sees a young adult Billie, who is going out of rehab and finally getting baptized after her father deserted her and her mother died from hitting rock bottom.

The Geckos survive their test as they unlock the vault in Jim's room and shoot him "dead". They come across the handle Tanner opened earlier and Richie grabs the round jar and a serpent appears. Richie swallows the serpent containing Santánico's blood, making him her prince.

Carlos betrays Santánico by siding with Narciso and the Nine Lords. He kidnaps Richie, wanting Seth to bring him the $30 million oil bonds. A final battle ensues, as the female culebras help fight Narciso, Carlos and their men while Seth rescues Richie. Before the sun rises to cleanse the bar/temple of its cult, Gonzalez threatens Richie with a stake, but decides not to kill him. Gonzalez returns to his family, Richie and Santánico head for the States, Carlos is condemned to the labyrinth, and Seth and Kate ride off together. 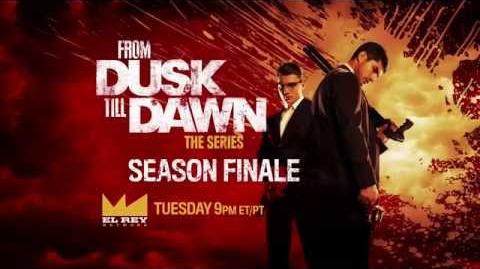 Next On From Dusk Till Dawn The Series - Episode 10