From Dusk Till Dawn Wiki
Register
Don't have an account?
Sign In
Advertisement
in: Episodes, Season Two, Flashback episodes

There Will Be Blood

The Last Temptation of Richard Gecko

In 1912, a group of miners are seen digging under a well but when the Prospector, one of the miners, decides to go deeper into it, he releases a hidden pool of blood. He walks out possessed and covered in blood, and kills the rest of the miners.

In the present day, Malvado tells Richie about succeeding him and he needs to make up his mind, as he [Malvado] has to leave before sunrise. Malvado brings out a captive Kate whom he uses to find out Carlos's whereabouts, and sends her and Richie after Carlos to retrieve the ancient key. Paloma, who has been turned by Malvado, tells Santánico that he is departing to El Rey and a mysterious individual is making his way to Jacknife Jed's. The individual walks into the establishment and asks Alice to bring him a few items, and it's revealed he is also a culebra. Seth is being tortured by the Arbiter and getting closer to having his skin flayed, he manages to get Arbiter shoved into a cage with rage filled culebras, who tear him apart.

Carlos finds the blood well and uses the ancient key to unlock the pool of blood. Richie and Kate arrive at the well, she also discovers he plans to use Scott as a sacrifice as well for the blood, and she runs to warn her brother. Richie shows up and threatens Carlos, but both he and Kate are held back. When Kate decides to reach the pump for culebras like Scott, Carlos shoots her twice.

Santánico and Malvado finally confront each other after she kills Paloma and he uses his venom on her, making her fall into a paralyzed state. Malvado attempts to leave for El Rey with Santánico, but she engages in a fight with him and with the help of Seth, kills him. When Malvado is killed by the two, the driver leaves the establishment. 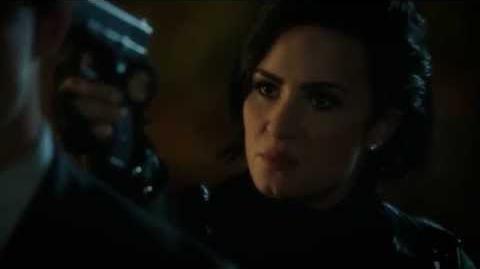 From Dusk Till Dawn
There Will Be Blood Clip